You are here : Shatter The Backboard » MLB » The end of Big Game?

The end of Big Game? 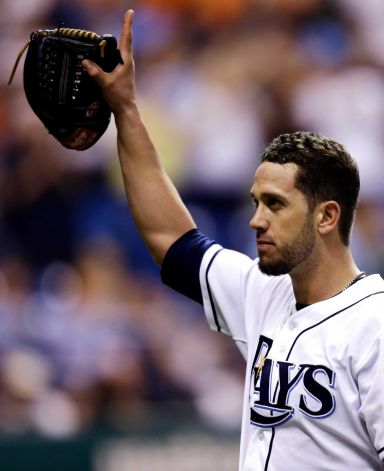 I walked into a sports bar the other night just as James Shields had struck out his record-setting, fifteenth batter.

Watching Shields walk off the mound in the ninth, holding back the tears, was a fitting finale to the Tampa Bay Rays season, his final out of the night recorded, confident he had given his all, yet his team behind 1-0.  “Big Game” James was nearly unhittable Tuesday night.  The only problem, as has happened all too often this season, was that the lineup behind him was equally unable to manufacture a hit.

And so Shields’ night, and perhaps career with the Rays, came to a close.  He tipped his cap to the roar of the appreciative crowd then descended into the dugout to the hugs and high-fives of his teammates, probably wishing he could have traded some of that love for a run or two, but alas, he pitches for the Rays and that’s not how they roll.  Until last night, no pitcher in the live ball era had ever lost a game after striking out fifteen, walking none, giving up only two hits and one lone run.  It was another typical outing for Shields and unfortunately, another typical outing for the Rays lineup.

Don’t let their run differential of +120 fool you.  These Rays, who missed the post-season by only three games, would beat you 11-2 just as often as they’d lose 2-1.  They featured what could legitimately be considered one of the best pitching staffs ever assembled from top to bottom.  They allowed the fewest runs in the majors but finished 28th in the league in hits and 27th in batting average.  Not to be outdone by teammate and strong Cy Young candidate David Price, who won 20 games and finished with a 2.56 ERA, Shields, their number two starter, finished 15-10 and led the team in strikeouts with 223.  He won’t get any love for Cy Young this year but he finished third in the voting for the award last year.  Additionally, Shields has started at least 33 games for the Rays every season since 2008, showing he’s the most consistent arm in that rotation.  We’ll see if the Rays are about to make him the highest paid. Read more…