You are here : Shatter The Backboard » NFL » The perils of wagering with a small-time bookie

The perils of wagering with a small-time bookie 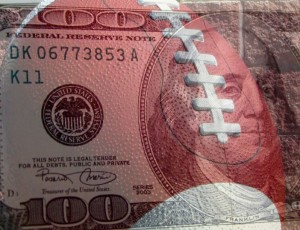 I read online that some lucky guy just hit a 23-team parlay and turned his $100 wager into 25 grand.  Must be nice.

I’ve got a few buddies that are just as hot lately when it comes to wagering.  One friend has reached near unprecedented swami status by winning our local bar pick ‘em pool (40+ participants) two out of the last three weeks.  Another friend had the stones to bet $800 on a three-teamer that hit this past weekend.

It is this final wager that I’d like to talk about.

My friend, let’s call him Skittles, likes to place a healthy wager on football every so often.  He’s got the bankroll to do so.  He’s not the most knowledgeable sports fan in the world but by no means is he a dummy.  As you can see by the parlay he just hit, he obviously knows what he’s doing.

But this was his first wager placed with a new, small-time bookie, meaning a) he didn’t make as much as he could have and b) he’s having a hard time getting paid.

First of all, for you beginners out there, let’s discuss what a parlay is.  A parlay is where you take two, or three, or four or however many games you feel like betting on and string them together into one single bet.  By doing so, you dramatically increase your payout but you must also hit every single one of those wagers, otherwise you lose your money.  For example, let’s say you bet the Giants, Jets, Dolphins and Patriots all to cover their respective point spreads.  If only three of those four teams cover, you lose your wager.  They all must hit. 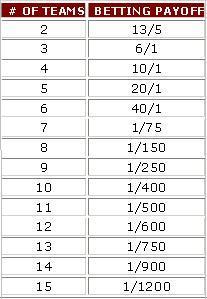 The standard payouts for parlays are such.  Two-teamers pay 2.6 to 1.  Three-teamers pay 6 to 1.  Four-teamers pay 10 to 1.   Anything more than that and you’re really spreading yourself thin, although on the occasional trip to Vegas, it’s always fun to drop a few bucks on a monster parlay or round-robin, just to see what happens because when they hit, they hit big.

Let’s get back to Skittles.  His first mistake was misunderstanding the comeback on his wager, thinking he was going to get paid out more than he did.  When placing a wager, whether it’s at a sportsbook, card table or wherever, it’s always important to know what you’re risking as well as your potential reward.  Parlays are a smart way to wager, primarily because you’re not paying the juice on a single bet but it’s crucial to know what to expect back if your bet hits.  Skittles’ bookie only paid five-to-one on that three-team parlay, essentially shorting him the $800 he would have won had he placed that bet through a more legitimate source. Read more…